Big Sean links up with Samsung to finally unveil his newest track “Fire” in its entirety from his upcoming Hall Of Fame LP.  Produced by DJ Camper, it was only a few months ago when the G.O.O.D. Music artist treated fans in London to the song during his set at the Yahoo! Wireless Festival.  Though Sean was only generous enough to preview the song’s hook and first verse, it was definitely enough to intrigue fans everywhere to want to hear it in full.  Driven by a dominant “fire” vocal sample and slapping drums, Big Sean’s latest offering finds the Detroit native dropping introspective and humble bars with intentions of inspiring and motivating listeners to find and use their “fire” to make their dreams a reality.  Sean’s sophomore effort with Hall Of Fame is set to release on August 27.

Looks like Def Jam has finally released and confirmed the official artwork for Kanye West’s upcoming Yeezus album.  The artwork is similar to the decoys that were circulated throughout the internet a few weeks ago.  Here we have a simple blank CD with the album’s track list around the edges placed in a clear jewel case.  The only thing that really stands out is what appears to be a piece of red tape with the album title written across it very sloppy in black sharpy.

Below is also a recent snippet that was released for a track titled “Bound” which will be featured on Yeezus.  I can’t lie, I’m very excited to see what Kanye has in store for hip hop fans with this album.  Yeezus will be in stores and digitally available on June 18.

Def Jam delivers a new promotional video for The-Dream’s “Pussy” which is featured on the singers new IV Play album.  Track features Pusha T and Big Sean.  Check out the footy above to see some pretty “interesting” visuals that are well worth your time.

New music from rapper Logic who recently made the 2013 XXL Freshman class and has since signed with Def Jam records.  Today, Logic drops his new 20-track mixtape Young Sinatra: Welcome to Forever for all of our listening pleasure.  Features include the likes of Dizzy Wright, Trinidad James, and Jhené Aiko to name a few.  Official track list below.  Click HERE to download. 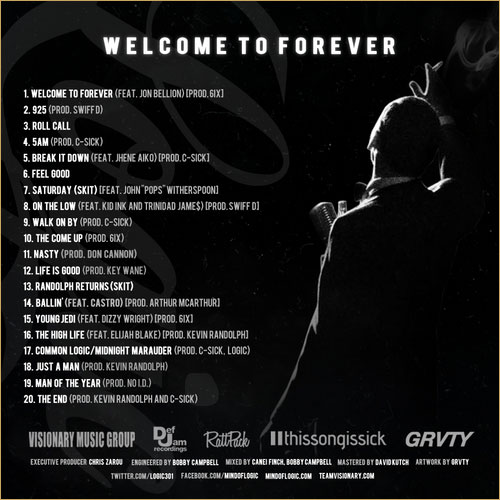 K.R.I.T. comes through and drops the last leak with visuals from his upcoming album King Remembered In Time. Luke Choi of KRSP drops this gem with some slick editing with the intent to showcase K.R.I.T. in a reflective dream like state.

TMZ recently caught up with LL Cool J to finally find out if he would be willing to play or is considering a potential role as Christopher Dorner in any future film.