Dr. Dre and Kendrick Lamar link up for a new Beats By Dre commercial to promote the company’s new wireless pill designed speaker just in time for the holidays.  Check out Lamar and the West Coast legend as they work hard in the studio on a new track.  There’s also a scene where Lamar shows off the song to some friends at the local barbershop before heading back to the studio with Dre to finish up what they started.

Here’s a short commercial of a new upcoming episode for Wiz Khalifa’s “DayToday” series.  The black and white visual showcases the rapper and his crew in the middle of a serious smoke session as they can all be seen laughing and coughing heavily.  The new Europe edition of “DayToday” continues to highlight some memorable moments that took place during Khalifa’s overseas tour.

Derrick Rose and ADIDAS drops a new promo commercial starring plenty of star power from the likes of 2 Chainz, Common, Dom Kennedy, Big Sean and jeweler Ben Baller.  The concept of the visual suggests the idea that if Rose had everything striped away from him he would still have everything because his true love lies in the game of basketball.  Narrated by Rose, watch as the NBA star takes in the view from his mansion, parties the night away and purchases some bling-bling before hitting the gym to work on his game.

Rapper A$AP Rocky and super producer Swizz Beats team up with Monster to showcase their DNA headphone line in a new commercial also featuring Best Buy.  While out on the road and attempting to collaborate on Swizzy’s tour bus studio, the two realize there’s no headphones in the booth and so begins the journey to struggling electronic retailer Best Buy.  The short promotional video keeps things simple and is straight to the point as it concludes with Swizz picking up a pair of DNA’s for A$AP Rocky to use.

With EA’s FIFA 14 coming out in a few weeks, the company debuts their new TV commercial for the game which shows off some quick game play action and YMCMB’s Drake.  The Canadian rapper and former Degrassi grabs the sticks and jumps right in to an online match against presumably a little girl from another country.  Check out the short promo visual below. 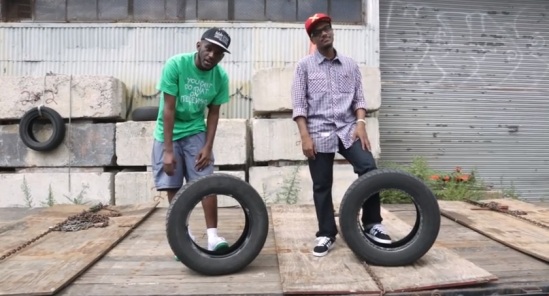 Tanya Morgan deliver a new short infomercial inspired visual as the duo prepare to release their upcoming Rubber Souls LP on September 24.  The short video finds the group attempting to get viewers excited enough to pre-order and purchase their new rubber souls tires which is obviously a clever play off the project’s title.  Producer 6th Sense who is taking up the production duties for album is also featured in the commercial and lends a few words to co-sign the credibility of rubber souls tires.

Busta Rhymes drops a new Armageddon like commercial to promote the upcoming sequel to his, Extinction Level Event, album released in 1998 by Flipmode and Elektra Records.  The recently signed YMCMB artist declares that the second coming is on the horizon with part two and informs his fans to stay tuned.  Check out the apocalyptic visuals below.