Dipset’s Cam’ron and Juelz Santana combine forces with Reebok to drop limited holiday colorways of some of the brand’s classic models.  Check out this commercial of the duo as they hang out in sunny Miami and hustle a few ballers on the local court with their superior footwear.  For what it’s worth, this is pretty entertaining and definitely has its funny moments.  You can’t knock the hustle.

Reebok links up with Shaq for a new commercial which is inspired by the former NBA star’s roots in Newark and the upcoming “Brick City” color way of his Shaq Attaq sneakers.  Watch as the Diesel shares walks the halls of his old school and drops some deep narration on what his city means to him and how it was responsible for molding him as a person and a player.  Rapper Redman also makes a quick cameo towards the end along with a few students who join in to have some fun.

Drizzy Drake shares a new confessional where he takes the time to explain how his music embodies the spirit of Toronto.  The YMCMB rapper touches on his love for the city and points out that he can live anywhere in the world but no matter what always finds his way back home.  Channeling Toronto in his music, Drizzy breaks down why his city is an ongoing inspiration to him and shares his passion for the Raptors franchise.  Watch as Drake opens up on the evolution of the organization, his connection with the team and reassures fans he’s motivated to elevate the team in anyway he can to the next level. 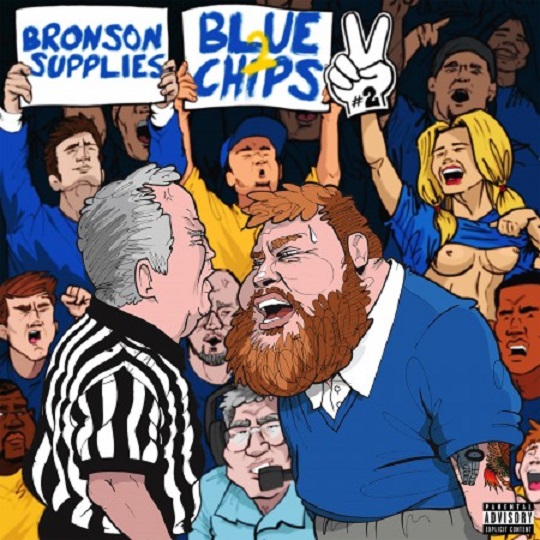 Action Bronson liberates the artwork to his upcoming collaborative mixtape with producer Party Supplies.  Blue Chips 2 will boast 19 new tracks from Bronsolini and is set to hit the internet on November 1.  Also, take a look at the tracklist provided to see the project’s full details courtesy of a screenshot off Action’s cell phone.

G.O.O.D. Music’s 2 Chainz sits down for another off-the-air interview with ESPN’s Stephen A. Smith.  Take a look as 2 Chainz at first comes off hesitant to reveal that his favorite NBA team is the Lakers but eventually opens up to explain why he doesn’t think they’ll do much during this upcoming season.  Still, 2 Chainz makes it clear he has a lot of faith in Kobe Bryant and is looking forward to him hitting the court again sometime around Christmas.  The rapper elaborates on his team by explaining he feels the organization is looking to build towards future goals and not necessarily a championship any time soon.  Smith decides to engage 2 Chainz a bit and playfully asks him questions to see what his thoughts are on the Clippers.  Before calling it a wrap, 2 Chainz explains that he’s not worried about the Clippers winning rings anytime soon because he believes they still have tough opponents to get through like OKC, Golden State and the Spurs. 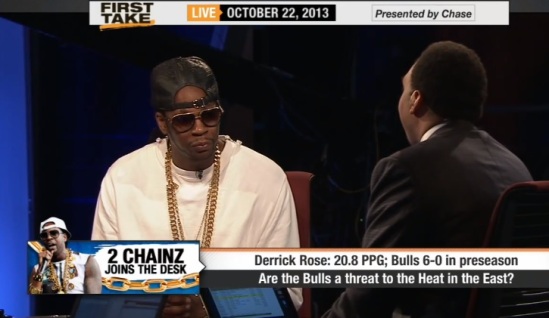 2 Chainz joins Stephen A. Smith and Skip Bayless on a new episode of ESPN’s First Take.  Take a look at this clip from the show which showcases the G.O.O.D. Music artist weighing in on the debate if the Chicago Bulls and Derrick Rose have a real shot at competing with the Miami Heat and Lebron James for the eastern conference.  Skip Bayless backs the rapper up and sides with him on the issue as he puts his faith in Miami by explaining that despite Derrick Rose’s obvious skills he’ll still be unable to single handedly defeat Lebron James and company.

Watch as DJ Khaled and French Montana initiate a $10K between each other to see who could shoot the best out of five out Rick Ross’ basketball court.  The debate eventually catches the ears of Meek Mill and Rick Ross who decide to jump in on the bet and put up more dough for a hefty new wager set at $120K.  Cameras were rolling to capture the moment as it unfolded at Ross’ mansion and the crowd gathered to put on the added pressure.

Drizzy Drake is making moves in his city.  Today, Drake took the spotlight as he addressed his new position as the Toronto Raptors Global Ambassador.  Decked out in a vibrant blue suit, the YMCMB rapper spoke on his love for the city of Toronto and explained how he’s always been a die hard fan of the basketball team.  NBA and Raptors affiliates listened as the Nothing Was The Same artist spoke out at a press conference and announced his excitement as the host for the upcoming 2016 NBA All-Star weekend which will take place in Toronto.

Metta World Peace recently paid Ebro a visit at HOT 97 and decided to play his new song titled “Peace” for the listeners.  Metta reassured fans the track was dope after finding himself under Ebro’s inquisitive spotlight for a moment.  Watch as the NBA player talks about his transition to the New York Knicks and lets the fans know what they can expect to see.

A$AP Rocky gets the official feature and narrates Adidas’ new commercial for their #QuickAintFair campaign.  Rocky’s “Goldie” track produced by Hit-Boy serves as the soundtrack to the visuals.  Keep an eye out for cameos from the likes of John Wall, Jrue Holiday, and Damian Lillard.  Check out the basketball visual above.

When you’re Quicker than your opponents, it ain’t fair. It ain’t fair that Quick goes number 1, makes All-Star teams and wins Rookie of the Year. It ain’t fair that the Crazy quick has the innovation and technology to make you Quicker. A$AP Rocky tells the story of #QuickAintFair featuring John Wall, Damian Lillard and Jrue Holiday.