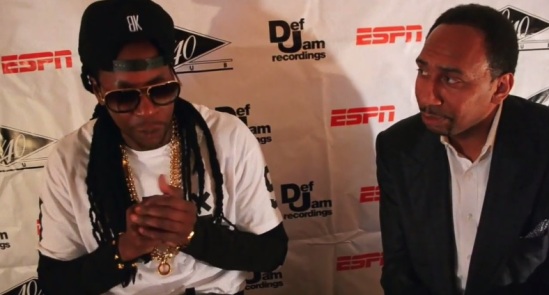 G.O.O.D. Music’s 2 Chainz sits down for another off-the-air interview with ESPN’s Stephen A. Smith.  Take a look as 2 Chainz at first comes off hesitant to reveal that his favorite NBA team is the Lakers but eventually opens up to explain why he doesn’t think they’ll do much during this upcoming season.  Still, 2 Chainz makes it clear he has a lot of faith in Kobe Bryant and is looking forward to him hitting the court again sometime around Christmas.  The rapper elaborates on his team by explaining he feels the organization is looking to build towards future goals and not necessarily a championship any time soon.  Smith decides to engage 2 Chainz a bit and playfully asks him questions to see what his thoughts are on the Clippers.  Before calling it a wrap, 2 Chainz explains that he’s not worried about the Clippers winning rings anytime soon because he believes they still have tough opponents to get through like OKC, Golden State and the Spurs.