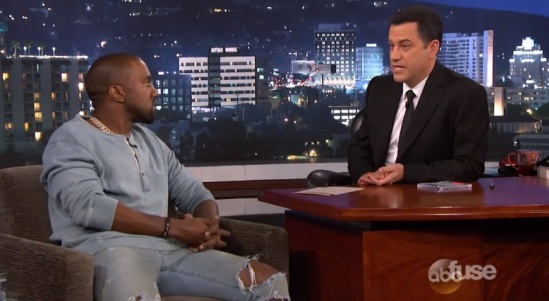 Here’s a nice recap courtesy of FUSE on what went down last night as Kanye West appeared on Jimmy Kimmel Live to discuss his recent feud with Kimmel after the talk show host spoofed his BBC interview with Zane Lowe.  Ranting for close to seven minutes, West was allowed the freedom to tackle a number of topics which included his idea that he’s hit a glass ceiling as an entrepreneur, his relationship with reality star queen Kim Kardashian, being shunned by the fashion industry and much more.  Kanye also clarified that the only reason he was willing to smooth things out with Kimmel was because he knew the host personally as well as friends and family members of his.

Kanye West was recently out and about in Beverly Hills when a group of Paparazzi attempted to capture him and girlfriend Kim Kardashian ducking into a restaurant.  The only problem is instead of ducking and avoiding snaps from the paprazzi, Mr. West bowed right into a metal stop sign and immediately became enraged.  As shown in the clip above, West runs into pole and eventually makes his way back out from the restaurant to confront some pap’s who were still outside.  You can clearly hear Kanye shouting for some privacy and demanding the paparazzi stop taking photos.