KiD CuDi turns up the energy at Rock The Bells 2013 in San Bernardino with “Marijuana” and “Memories.”  Take a look as Cudder puts it down for the fans at San Manuel Amphitheater and gets the party going with his upbeat performance.

KiD CuDi keeps the momentum going with his energy packed performance at Rock The Bells 2013 in San Bernardino at San Manuel Amphitheater.  Watch as the moon man goes to work and closes out the first day of the music festival with the fan favorite “Cudi Zone.”

Smoke DZA takes the stage at Rock The Bells 2013 live at San Manuel Amphitheater in San Bernardino.  Take a look as the Kush God hits up the Hip Hop DX stage and delivers a memorable performance.  Check out DZA in action as he performs “Ashtray” off his Rugby Thompson mixtape live for fans .

Before calling it a wrap on his performance at Rock The Bells 2013, MMG rapper Stalley treats the crowd to a performance of his latest single “Swangin.”  Watch as Stalley holds it down live at the Hip Hop DX stage with his southern inspired standout track off his recently released Honest Cowboy mixtape.

Stalley jumps into some new music for the fans with “A-Wax” off his recently released Honest Cowboy mixtape.  Inspired by the film Menace II Society, Stalley takes the Hip Hop DX stage and delivers a solid performance of the track which finds the MMG rapper paying homage to the movie’s “A-Wax” character.  Take a listen to the smooth track and see how it all went down live.

MMG rapper Stalley performs “Hammers & Vogues” off his Savage Journey To The American Dream mixtape.  Watch as the Cleveland MC hits the Hip Hop DX stage and puts on a dope show for the fans in San Bernardino at Rock The Bells 2013. 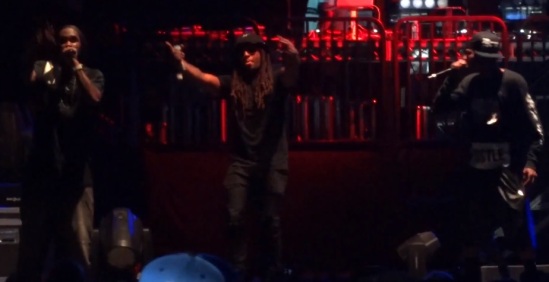 After laying down some of their classics like “1st Of That Month” and “Thuggish Ruggish Bone,” the Cleveland natives surprise the crowd at San Manuel Amphitheater to a special guest performance from Taylor Gang artist Ty Dolla $ign.  Bone showcases their latest collaborative single “Everything 100.”