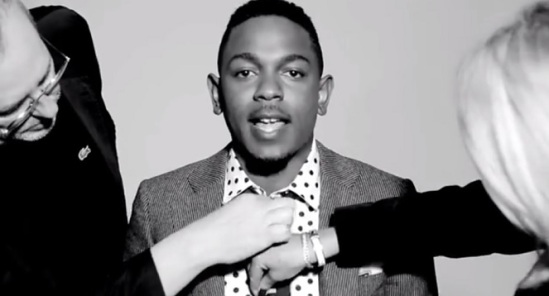 Apparently even GQ is capitalizing on exclusive content and visuals these days as they release a new “GQ Freestyle” with Kendrick Lamar.  The video showcases the young Compton native as he gets spruced by for his GQ Men of the Year photo shoot with the magazine.  In between all the flashing lights, Lamar stops to drop a couple of bars in front of a white backdrop as a few extras on set make sure he looks real dapper for the camera.  Kendrick Lamar is set to be featured in the December 2013 issue of GQ.

Kendrick Lamar tore down the stage in Philadelphia for Powerhouse 2013 as the rapper jumped into “Money Trees” and “Backseat Freestyle” featured on his platinum selling Good Kid m.A.A.d. City LP.  Backed by a live band, the Compton native performed his fan favorites and elevated the level of excitement in the venue.  Take a look at the video coverage courtesy of HipHopSince1987 to see Kendrick holdin’ it down at the Power 99fm sponsored event.

Kendrick Lamar participated last weekend in the BET Awards’ annual cypher sessions along with the rest of TDE and footage has now surfaced of the Compton emcee throwing what appear to be subliminal jabs in the direction of YMCMB rapper Drake.  Courtesy of the short clip provided by AllHopHop, K-Dot can be seen dropping a few bars which include, “And nothing been the same since they dropped Control, and tucked a sensitive rapper back in his pajama clothes.”  Needless to say, all signs appear to be pointed in Drake’s direction, however, it hasn’t been officially confirmed by Kendrick or any of his people if that is truly the case.  You read between the lines. 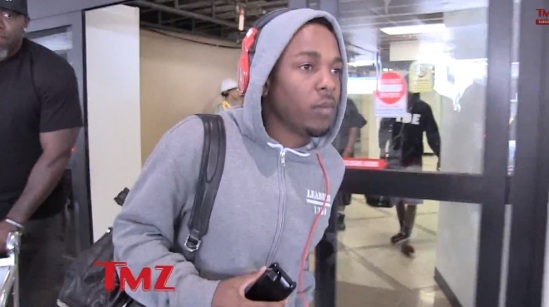 TMZ caught up with Kendrick Lamar at LAX and got his opinion on the numerous “Control” responses he’s received since the unveiling of his controversial verse.  As the Compton native made his way to enter the car waiting for him, K Dot confidently lets the cameraman know that he feels every rapper that’s released an official response towards him needs to try harder.  Not saying much of anything else, Kendrick drives his opinion home as he repeats himself just before driving off.  Check out the exclusive footage courtesy of the all seeing TMZ.

While performing out in Brooklyn last night, Kendrick Lamar decided to take the opportunity to send a live shot right back in Meek Mill’s direction after his recent “Ooh Kill ‘Em” diss.  Take a look as the Compton, Calif. native subliminally shouts, “There’s one nigga in particular that needs to realize that there’s ‘levels’ to this shit. I’m mother fuckin’ king Kendrick.”  However, according to AllHipHop.com who was present for the show, Kendrick had a few more choice words for Meek.

Kendrick Lamar performs his hit single “Bitch Don’t Kill My Vibe” live at Rock The Bells 2013 in San Bernardino.  In front of a venue full of screaming TDE fans, Kendrick jumps into the standout track off his platinum selling Good Kid m.A.A.d. City LP.  Watch how it all went down live at San Manuel Amphitheater.

Compton, Calif. native Kendrick Lamar kicks things off at Rock The Bells 2013 with “M.A.A.D. City” off his platinum selling album Good Kid m.A.A.d City.  Check out the young TDE artist go to work and hold the crowd down at San Manuel Amphitheater in San Bernardino.