Following game seven of the NBA Finals between the San Antonio Spurs and the Miami Heat, rapper Drizzy Drake attempted to make his way with his entourage into Miami’s locker room to celebrate and congratulate Lebron James but was denied access.  From what can be seen in the short clip, a representative for the team or venue security stopped Drake and company at the entrance doors and justified the decision by explaining to the rapper only media was to be permitted.

Drake’s response? Clearly bothered, the YMCMB artist responded back by stating, “I am media”.  I see what you did there Drake.  He knows what the man meant but he chose to respond with the clever double entendre wordplay.  Check out the diss heard throughout all the land go down in the clip above.

In the first part of Weezy’s recent sit down on Jimmy Kimmel Live, the Cash Money artist discusses his past health scares with seizures and clarifies why he’s been M.I.A. the last few times he was suppose to make an appearance on the show.  Another interesting tidbit of information shared by Wayne is the fact that he was alone upstairs and randomly discovered by a friend during his most violent seizure.  In typical humorous fashion, Kimmel is quick to point out that the rap start owes his friend a debt of gratitude seeing as how he most likely saved his life.

In part two, Weezy F. clarifies his currently relationship with the Miami Heat organization and clears up the rumor that he’s actually banned from their home venue along with his new interest in the hockey team the L.A. Kings.  Kimmel also takes the opportunity to question Wayne about his past explicit comment on having slept with Heat star Chris Bosh’s wife to which the seizure prone takes a page out of Jamie Foxx’s book and blames it on the alcohol.

In the final clip, Wayne shares his desire to retire from the rap game and announces that he would like to make his exit following the release of his Tha Carter V album. Finally, Weezy shares his sudden interest in skateboarding that began about two years ago after watching an episode of the Camp Woodward show.

Rick Ross and his son recently sat court side while attending game two of the Miami Heat vs the Chicago Bulls series.

So I had to post this strictly off general principle.  This is by far the funniest “Harlem Shake” video I’ve seen yet.  Check out Lebron and company act a straight fool in the locker room.

Tonight Weezy phoned into radio station 99 JAMZ in Miami to speak on his recent comments during a verbal rant over of All-Star weekend about Lebron James, Chris Bosh, Dwayne “shewade” Wade, the NBA, and the Miami Heat organization   Weezy claims that in fact he and Lebron are actually good friends and that he has some sort of a close relationship with the King’s mother.  Make no mistake, Wayne makes it very clear that he has no remorse for his actions at his party, doesn’t apologize to Chris Bosh’s wife, and only wishes for the public to disregard his “fuck Lebron” comment.  Needless to say this entire interview over the phone comes off a bit awkward and confusing. 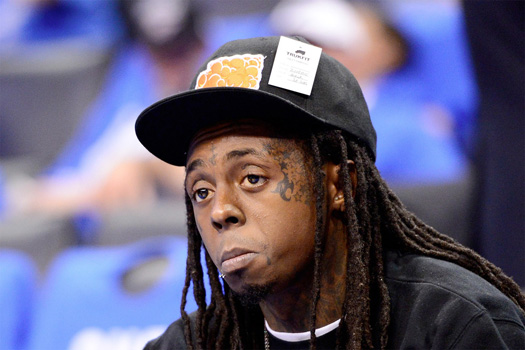 Here is clearer footage of Weezy taking the stage over All-Star weekend and verbally letting the NBA and Miami Heat organization have it.  In the clip you can also hear Wayne much clearer and you can get a chance to also see reactions from other artists on stage during the rant such as Drake and Baby.

In an absurd fit of rage Lil Wayne recently proclaimed himself the “new 2Pac” during a performance over the NBA’s All-Star weekend.  Check out the footage that’s recently surfaced from his performance where he goes in on Chris Bosh, Lebron James, Dwayne Wade, the Miami Heat organization and the NBA.

….and I fuck Chris Bosh wife.