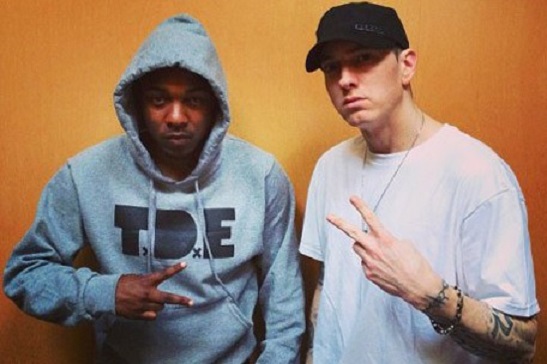 Detroit native Eminem combine forces with Compton native Kendrick Lamar for “Love Game,” one of the many standout tracks featured on Slim Shady’s upcoming eighth studio album The Marshall Mathers LP 2.  Take a listen as Lamar and Em’ keep things strictly lyrical and serve up their explicit take on love and relationships.  Back in June a photo of Kendrick Lamar and Eminem working together in the studio surfaced and subsequently resulted in the excitement of fans everywhere who patiently waited to see what would come about.  There’s no telling if “Love Game” is the only song or one of many that came about during that particular session but if this was the creative direction they were going in, I think it’s safe to say that listeners would love to hear more from these two powerhouse emcees.  The Marshall Mathers LP 2 is due out on November 5.