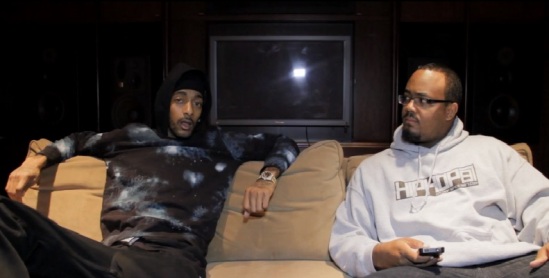 HipHopSince1987 catches up with Los Angeles’ Nipsey Hussle for an exclusive interview.  Check out Neighborhood Nip give details on his new Crenshaw mixtape organically came about after recording for his upcoming debut album Victory Lap.  Nipsey opens up about his fallout and eventual reconciliation with long-time friend and producer Ralo and the impact it’s had on his music since.  Hussle also reveals that he doesn’t have a favorite track off Crenshaw but explains that “Crenshaw and Slauson (True Story)” is probably his most honest song as it contains most of his story.

As the discussion continued, the rapper looks back on some of his setbacks he had to endure such as having the police raid his studio, dealing with his brother Blacc Sam going to Prison, dealing with issues in the streets and even admits he use to transport pounds of drugs to Las Vegas.  Before calling it a wrap, Nipsey Hussle addresses the project’s single “Checc Me Out” with Dom Kennedy and reassures viewers that they will see a music video for soon soon.